The history and methodology of clown therapy 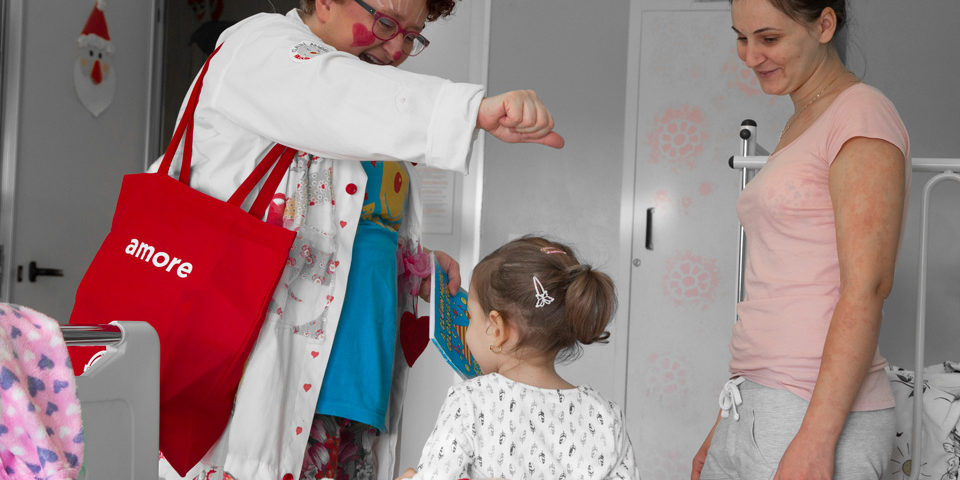 What is clown therapy? It is a positive therapy to help face hospitalization and illness with a positive spirit. Laughing, smiling, having a good mood becomes important for the treatment process, as it produces an improvement in the climate in which the therapies are faced. Several scientific studies have been able to verify that laughter, good mood, help to heal faster.

The first entry of the clown into the hospital on a non-regular basis is traced back to the Fratellinis, a famous trio of Prato clowns composed by Paolo, Alberto and Francesco Fratellini, towards the end of the 19th century. Since 1908 there has been documented evidence of periodic circus clown interventions in pediatric hospital wards. Cover of the “Petit Journal” of 13 September 1908 was dedicated to colorful clowns in the hospital. The first Clown Care Unit (CCU support unit composed of clowns) dates back to 1986 by Michael Christensen’s Dr. Stubs, clown of the Big Apple Circus in New York.

A notable increase in clown therapy occurred in 1998 with the film Patch Adams, which tells the story of the American doctor Patch Hunter Adams who, with his way of approaching patients, distorted the doctor-patient relationship. After the film Patch Adams in 1998, with the actor Robin Williams clown therapy spread all over the world and often voluntary associations were born that are committed to bringing smiles to many difficult environments: hospitals, family homes, places with earthquake victims, to the territories at war. “Laughing is not only contagious, it is also the best medicine” /Patch Adams/.

However, this idea was not easy because culturally associating the serious and professional figure of the doctor with a clown was unthinkable. Although, the facts have shown that patients who became more relaxed and happier, react better to treatments and drugs and the idea of a visionary doctor has become a reality in many hospitals. According to doctor Patch Adams, the most revolutionary action anyone can take is BE HAPPY. A person can choose to be happy or unhappy. Most of us are so used to pain that the idea of living happy at all times may seem impossible, even unnatural. “The more you enjoy doing what you do, the easier it is to help other people have fun with you. Is it contagious!” says Patch Adams and the clowns who do clown therapy in the hospital know this very well.

The purpose of clown therapy is to humanize and improve the person’s quality of life. Its action must tend to positively modify the emotional state of the individual. The clown volunteer performs an internal cognitive restructuring function, which provides an alternative way of living in the difficult situation. By distracting the person, with the joke, with the gag, with the little magic, with the gaze, the clown leads him to come out, to detach themself momentarily from the situation they are experiencing, thus reducing the pessimistic and passive attitude.

Numerous studies in the literature have shown that clown therapy is a therapeutic activity that can support medicine, as it promotes personal well-being through different ways, resulting in an effective strategy to cope with stress, reducing the harmful effects on health. Also known as laughter therapy or smile therapy, clown therapy is based on the healing and traumatic properties of laughter applied in the medical field and in various contexts of discomfort.

In the 1970s, Patch Adams saw the positive effects of smiling in helping relationships, demonstrating that laughter is not only contagious, it is able to arouse joy and pleasure, triggering effects in individuals positively both psychologically and physically.

Humor was considered by Martin and Lefcourt (1983) as a stimulus, mental process, response and as a therapeutic intervention. They demonstrated that it has a significant effect on the relationship between stressful events and mood disorders, showing that individuals with a high sense of humor have fewer disturbances than those who lack it. Humor plays an important role in improving the quality of life in health institutions, it can be a useful strategy used by patients to manage their condition as an effective tool to counteract the stress of hospital life therefore as a strategy to reduce anxiety in hospitalized children. Barkmann et al. (2013) state that clown doctors represent a valuable aid for children in moderating anxiety, stress, sadness, thereby supporting the healing process. The specific work of a clown can be described according to the Barkmann through 3 models:

– using the performing arts, such as magic, magic tricks;

– as allies who offer emotional support to the patient. Dionigi (2014) argues that the figure of the doctor clown is leveraged on resilience, stating that on the one hand that the clown aims for distraction and temporary replacement of a negative emotion with a positive one, and on the other hand involves the use of being a clown. The term clown doctor was chosen for two reasons: clown, because it operates through the arts of clowning, and doctor because he acts in close contact with the team hospital wearing a white coat like doctors, but colorful and personalized with drawings related to the name of the clown himself, as per play down the figure of the doctor towards whom the patient prepares himself with less fear and the medical treatment to which the patient is assigned (Simonds and Warren, 2003).